Hypertriglyceridemia is a condition characterized by high blood levels of triglycerides, which are associated with atherosclerosis and a greater risk of heart disease. While there is evidence that low-carbohydrate diets can benefit plasma lipid concentrations by lowering triglycerides, the effect may be, in part, due to increased protein intake. Therefore, researchers investigated the independent benefits of supplementation of the diet with essential amino acids on blood, liver, and muscle lipid concentrations.

To determine if supplementing a normal diet with 11 grams of an essential amino acid-based formula containing arginine could lower circulating and tissue triglyceride levels and improve insulin sensitivity in elderly patients with glucose intolerance.

A 16-week supplementation regimen of 11 grams of amino acids a day with no changes to diet or physical activity levels resulted in significant improvements to triglyceride levels in the blood, as well as total cholesterol and very low density lipoprotein (VLDL).

Plasma triglycerides decreased approximately 20% from the start of the study, with the greatest reductions in patients with the highest levels at the outset.

Figure 1 demonstrates the improvements in triglycerides during the 16 weeks of amino acid supplementation. 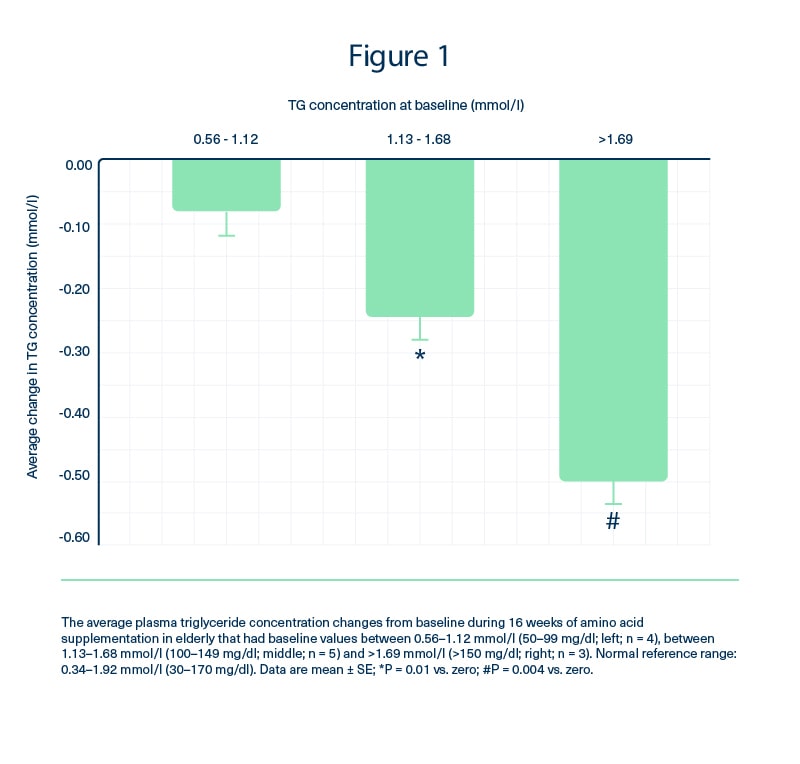 In addition, liver fat content dropped by approximately 50% with the greatest decrease obtained by week 8 and once again in patients that started with the highest concentrations as demonstrated in Figure 2. 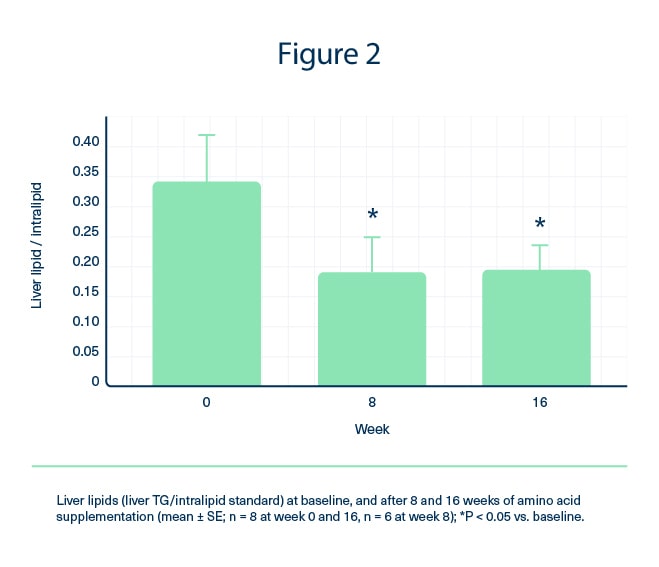 Supplementing with essential amino acids plus arginine lowers triglyceride, total cholesterol, and VLDL cholesterol levels in the blood and liver, and the effect is greatest at higher triglyceride levels, suggesting the potential of amino acid supplementation as a treatment for hypertriglyceridemia or hepatic steatosis (fatty liver). While there was a reduction in liver fat, insulin sensitivity did not improve, which indicates that fat accumulation in the liver is not the primary determinant of insulin sensitivity.

High triglycerides contribute to the hardening of arteries, which increases the risk of heart attack, stroke, and heart disease. And when triglycerides and other lipids accumulate in the liver, a diagnosis of fatty liver disease may follow. Amino acid supplementation among other dietary interventions can help lower triglycerides that put your heart, liver, and other organs at risk.